Development of Prologis Fokker Logistics Park at Amsterdam’s Schiphol Airport required extensive work to the property, which had previously been used by an aircraft manufacturer. The result, after many years of revitalization, is now the largest private airport-connected logistics park in Europe with the highest safety standards.

Prologis had the opportunity to develop an expansive logistics park on the former site of the aircraft manufacturer Fokker. Its location directly adjacent to Schiphol Airport, the third largest airport in Europe, was ideal—and an excellent opportunity for Prologis to develop flexible, modern logistics facilities at one of the most sought-after locations in the Netherlands.

Prologis Fokker Logistics Park benefits from an unrivaled location with excellent connections to Schiphol Airport, the road network and public transportation. The logistics park is particularly suitable for air cargo-related activities and the high-tech sector.

The site of Prologis Fokker Logistics Park has a rich history. Between 1900 and 1950, the property was used for agricultural purposes, which was followed by a military base before the original Schiphol Airport was eventually built. After its destruction during World War II, present-day Schiphol Airport was relocated nearby. Today’s Prologis Fokker Logistics Park site was used by the aircraft manufacturer Fokker after the airport relocated.

After Fokker went bankrupt, Prologis acquired the property. In order to develop a logistics facility, the site required extensive revitalization. The ground was contaminated with various forms of waste, including concrete pillars from former buildings, the remains of an extinguishing agent used in the old Fokker factories and underground cables. In addition, the area had to be inspected for undetonated bombs left from World War II.

Prologis developed a master plan for the project, which was divided into several stages. Redevelopment work began in 2000, and the first tenant took possession in 2003.

Among other measures, Prologis decontaminated the property and groundwater. The pillars for the new buildings were positioned next to existing pillars, and miles of data cable were laid. Because the property is adjacent to Amsterdam’s airport, Prologis had to inspect the entire area for undetonated bombs, using magnetic resonance down to a depth of 8 meters. Suspicious objects were excavated and removed and turned out to be steel materials from, among other things, earlier foundations. This work alone took a total of two months. 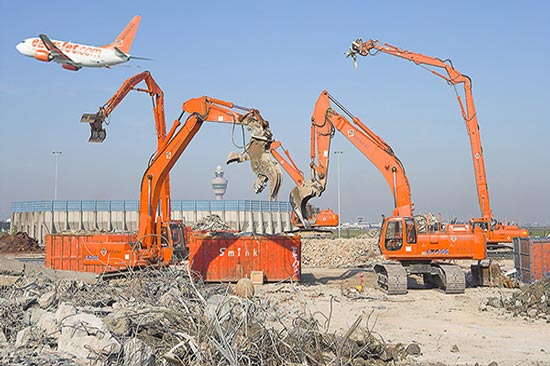 Prologis developed the logistics facilities in stages in accordance with the highest design, safety and sustainability standards. The entire park is fenced and accessible through only one entrance. Extremely high security is why the logistics park is particularly suitable for companies in the high-tech sector.

In December 2018, Prologis initiated speculative development of Unit B at the DC2 distribution center, which will offer 11,000 square meters of logistics space. Unit B is expected to be available to customers in the third quarter of 2019. The decision to develop this space speculatively was based on Prologis’ extensive customer network and historically high occupancy rate of 97.8 percent in Northern Europe (as of January 2019).

The new unit will have 16 docks and be designed for flexible use, meaning it can be divided into two separate spaces depending on customer needs. In addition, the logistics facility will stand out in regard to sustainability: Prologis aims to achieve a BREEAM accreditation of “Very Good.” The logistics park also offers space for further growth with the option to develop an additional building of around 10,000 square meters.

A person who accompanied the revitalization process and really knows the site like the back of his hand is the park manager Pieter van der Neut. He is impressed by the conversion of the area from a production site to a modern logistics park. “I started working at this site in 1981 at Fokker Aircraft. I never ever could imagine that after 40 years, this site would be redeveloped to a sustainable and future proof logistical business park. As a member of the park management organization, in cooperation with the property owners and users, it really is a challenge and privilege to exploit this site for at least the next 40 years.”

Spanning a total area of 170,000 square meters and encompassing 11 buildings, Prologis Fokker Logistics Park is the largest private logistics park connected to an airport in Europe. Foresight allowed Prologis to maximize the site’s prime location to develop modern logistics facilities. The extensive work on this project, including decontaminating the property and groundwater, provided additional experience in brownfield development.

In partnership with the International WELL Building Institute, Prologis Benelux launched, as one of the first logistics real estate developers in the...

Because we focus on sustainability, brownfield developments play a major role in the Prologis portfolio. These developments create new space with...